Ms. Ebesugawa is Assistant General Counsel for Hawaiian Electric Industries, Inc. Previously she served as an Associate General Counsel for Hawaiian Electric Company, Inc. where she provided legal support to personnel and management and advice in obtaining regulatory approvals for various projects. She also served as Executive Director of the Hawaii State Board of Education, where she provided legal and administrative services for matters before or involving the Board of Education.

Ms. Ebesugawa is currently the Second Vice President of the Honolulu Chapter of the Japanese American Citizens League’s Board of Directors. During her tenure as the JACL’s past Board President, she addressed issues related to marriage equality, homelessness, Native Hawaiian self-determination, and other civil rights issues that face the community. She also currently serves on the Board of Directors of the National Asian Pacific American Bar Association and has coauthored several academic publications and presentations regarding privacy in the workplace, Japanese American redress, and racial discrimination.

Joan Lewis is a 27 year Hawai’i public school teaching veteran and a long time education advocate.  Ms. Lewis has been a part of the teaching staffs of Nānākuli High and Intermediate School and Kapolei High School where her work with Native Hawaiian and Pacific Island students shaped her approach to teaching and learning. Ms. Lewis is one of the founders of the Hō’ola Leadership Academy, a 9-12th grade academy within Kapolei High School that provides a safe learning space for students who face obstacles that can undermine their success.  Graduation rates for students in this program have been in the upper 90 percentile.

Ms. Lewis has also served as a school, district and state leader for the Hawai’i State Teachers Association.  Her work as part of the HSTA includes providing culturally sensitive training and support for teachers in the Leeward District of the DOE, the development and delivery of courses to support students of diverse economic backgrounds, and the expansion of the teacher voice in support of Hawai’i’s students.

Ms. Lewis’ other experiences include service as a foster parent for Hale Kipa Inc.; an educational staff member for Palama Settlement’s In-Community Treatment Program;  a house parent for Child and Family Services Ila Humphrey home for girls recovering from sexual assault; and as a trustee for the Hawai’i Employer-Union Health Benefits Trust Fund.  These activities have been instrumental in developing Ms. Lewis’ belief that we must work together to provide the Aloha that all citizens, but especially the most vulnerable among us, need to survive and thrive.

Ms. Lewis earned her Bachelor’s degree in Education at Drake University and her Master’s degree from the University of Hawai’i at Mānoa.

Dr. Puette, was recruited from the mainland to teach English at a public school in 1969 just as the public sector collective bargaining was enacted.  In his first two years of teaching, he became a delegate at the founding convention of the Hawai‘i State Teachers’ Association, and organizer for the teachers first representation election, and picket captain on Maui in the union’s first strike.

He is currently Director of the Center for Labor Education & Research at the University of Hawai‘i – West O‘ahu in Kapolei. For more than thirty-five years, he has been teaching Labor Studies classes, and is the author of the books: The Hilo Massacre;  Through Jaundiced Eyes: How the Media View Organized Labor; A Readers Guide to the Tale of Genji, and the co-author with Dr. Keao NeSmith of Nā Lula Hālāwai: A Parliamentary Guide to Conducting Meetings in Hawaiian. In addition he has written numerous booklets and pamphlets, including CLEAR Guide to Hawai‘i Labor History and Pa‘a Hui Unions: the Hawai‘i State AFL-CIO, 1966-1991.

Over the years he has worked with the HCRC on many joint educational programs, and was the volunteer webmaster that created the first website for the HCRC (1997-2003) before it was able to afford a professional webmaster.  Likewise, he helped the Executive Director and staff at the local office of the EEOC to design the PowerPoint presentations used in HCRC public education programs between 2000 and 2008.

Dr. Puette is also a labor arbitrator; a Professional Registered Parliamentarian, a member of the Association of Hawai‘i Archivists, and the Hawaiian Historical Society.  Winner of Penn State’s Lowell-Mellett Award for Outstanding Media Criticism in 1993,  he received the George Meany Award for Outstanding Service to Youth by the Hawai‘i State AFL-CIO and the Aloha Council of the Boy Scouts of America in 1994; and in 2005 the University of Hawai‘i awarded him the Hung Wo and Elizabeth Lau Ching Foundation Award for Faculty Service to the Community. 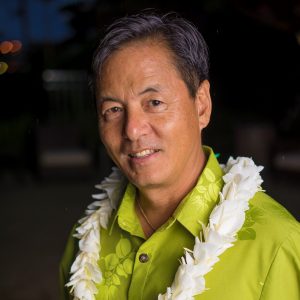 Jon K Matsuoka completed his graduate studies in social work and psychology at the University of Michigan in 1985 and in the same year assumed a faculty position at the University of Hawai’i Myron B Thompson School of Social Work.  In 2000 he became dean of the school and remained in the position for 10 years until becoming President of Consuelo Foundation in 2010.  After 6 years he left to form Pili Group Consultants.  He has been a resident of Papakolea for 25 years and enjoys backyard farming and raising bees.