The SFC is an administrative agency attached to the State of Hawaii (State), Department of Labor and Industrial Relations and recognized, for all intents and purposes, as Hawaii’s equivalent of the State Fire Marshal’s Office. Comprised of the four county Fire Chiefs and an administrative support staff, the SFC’s primary mission is to develop and support a comprehensive fire service emergency management network for the protection of life, property, and the environment for the State. Through a collaborative and unified approach, the SFC promotes the standardization of fire service reporting, training, sharing of technology, resources, and best practices.

In accordance with Hawaii Revised Statutes (HRS) §132, the SFC is tasked with the adoption of the State Fire Code and the support and assistance with federal grant programs for the fire service in Hawaii. The SFC may advise and assist the county fire departments where appropriate; prescribe standard procedures and forms related to inspections, investigations, and reporting of fires; and advise the Governor and State Legislature on issues relating to fire prevention and protection, life safety, and other functions or activities of the various county fire departments.

In 2009, the SFC was successful in securing the passage of key legislation that mandated that only cigarettes manufactured and packaged in compliance with the RIPC program may be sold.  The purpose and goals of this legislation were to reduce the number of fires attributed to cigarettes and to support this initiative on a national level.  By the end of 2011, RIPC laws were effective in all 50 states and the District of Columbia.  The RIPC program appears to be the principal reason for a 30% decline in smoking-related fire deaths based on statistics from 2003 to 2011.  HRS §132C outlines the RIPC law and can be found at:  HRS (hawaii.gov)

Fireworks
The SFC continues to propose and support legislation that addresses fire safety issues related to the sale and use of consumer and display fireworks.  Act 11 was signed into law on April 15, 2014.  It requires permanent and temporary fireworks storage buildings or where redistribution activities are performed, comply with the adopted building or fire codes or nationally recognized standards.

In 2010, the SFC successfully promoted the passage of legislation that allowed counties to establish and adopt regulations that are more restrictive than state law as it relates to the regulation of fireworks.  In essence, this “home rule” concept allowed the City and County of Honolulu to pass an ordinance that prohibits the sale, possession, and use of consumer fireworks, except for fire crackers by county permit, within its jurisdiction.  The SFC will continue its effort to strengthen the administration and enforcement of fireworks laws by working with county, state, federal, and private agencies and educating the community on fireworks safety.

RIPC, or fire-safe cigarettes, must be certified and approved as fire standard-compliant (FSC).  Manufacturers must submit written verification that their cigarette brand/styles meet the requirements of HRS §132C-4, and pay certification fees for each brand/styles that meet the requirements.  As of June 13, 2021, a total of 751 brand/style cigarettes are approved for sale in the state.  By law, cigarettes shall be recertified every three years.  The money collected for this program is expended by the SFC to defray the actual cost of activities and requirements of Section 132C-4, including employing one full-time administrator and one full-time assistant, purchasing cigarettes to send to independent labs for testing, and for statewide onsite inspections of cigarettes sold at retail stores. 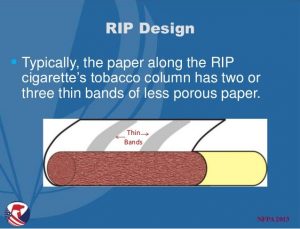 (Photo courtesy of the U.S. Consumer Product Safety Commission and the NFPA)
These cigarettes utilize paper with two or three thin bands of less-porous paper that acts as “speed bumps” to slow down a burning cigarette.  If an RIPC is left unattended, the burning tobacco will reach one of the speed bumps and self-extinguish.

Between July 1, 2017 and June 30, 2021, more than 2,500 field inspections were conducted across the state to ensure that only FSC cigarettes are being sold.  The letters FSC appears on packaging near the Universal Product Code on cigarette packs, cartons, and boxes.

To further ensure that retail establishments are selling FSC approved cigarettes, random packs of cigarettes were purchased and sent to pre-approved testing facilities for independent RIPC testing.  Many of the testing protocols have been developed similar to those used in states, i.e., Massachusetts, Pennsylvania and Kansas, who also conduct independent RIPC testing.  Between January 1, 2020 and June 30, 2021, a total of 420 cigarette samples have been submitted for testing.  Five brand/styles failed the initial test, and were repurchased for retesting and passed the second test.

The SFC monitors the effectiveness of the RIPC program and submits their report to the legislature every three years no later than the 30th of June at the conclusion of the three-year cycle.  The tri-annual report includes findings and recommendations for program improvements.  [L 2008, c 218, pt of §1]

Access the 2021 RIPC report to the State Legislative at:  https://labor.hawaii.gov/wp-content/uploads/2020/12/RIPC.pdf

Hawaii’s RIPC law does not apply to cigars, roll your own cigarettes, cigarettes sold on federal property, duty-free cigarettes, and devices known as E-cigarettes.

In conclusion, the SFC will continue to monitor the effects that the RIPC Program has in Hawaii.

The SFC supports the efforts of the SBCC as a forum to encourage a collaborative approach to the development and adoption of a comprehensive building code package for the State.  The position and concerns of the State’s fire service is clearly communicated and addressed through the SFC’s staff representative’s active and engaged participation as a voting member of the SBCC.  A specific example of this partnership and engagement’s value in the SBCC is clearly evident with regard to the evaluation and study of the residential fire sprinkler system issues.  The process of conducting this study has provided tremendous opportunity for stakeholders to consider various issues and aspects of this controversial topic, help dispel myths, and validate issues regarding mandating such systems in future codes.

The SBCC’s Investigative Committee’s Report on Fire Sprinklers in one- and two-family dwellings can be found at:

Act 164 was signed into law on June 30, 2014.  This important bill brought together numerous stakeholders who collaboratively worked to pass a bill that modifies the composition, quorum, and duties of the SBCC.  It clarifies terminology and the code adoption process, and makes an appropriation for staff.  Regrettably, the Governor never released the appropriated funds.

The SFC’s outreach mission also includes ongoing efforts with supporting and coordinating the delivery of statewide fire and emergency service training programs.  These courses are generally aligned with and administered through the National Fire Academy (NFA) and provide opportunities statewide via off-site or locally delivered courses by NFA instructors.  These training courses and programs range from public education and prevention, program development and management to leadership and professional development programs.

In 2011, the SFC succeeded in passing a state law to ban the sale or distribution of novelty lighters, which create an unnecessary attraction for children.

In 2012, the SFC successfully encouraged the passage of a law that prohibits the sale, possession, and use of devices referred to as aerial luminaries or sky lanterns.  These devices, which are essentially miniature hot air balloons, are propelled or inflated by an ignited fuel cell and drift in ambient winds.  The SFC’s success in this issue has received national attention, and other fire service and safety organizations are inquiring how the SFC accomplished this.

Act 164 was signed into law on June 30, 2014.  It authorized the SFC to establish statewide qualifications and procedures for testing, certifying, and credentialing individuals who conduct maintenance testing of portable fire extinguishers, fire protection systems, and fire alarm systems.

In 2018 during the Twenty-Ninth Legislature, the SFC was successful in spearheading efforts to pass House Bill 1778, House Draft (HD) 1, Senate Draft (SD) 1, Conference Draft (CD) 1; which improves access to comprehensive medical coverage for Hawaii’s fire fighters (with five or more years of service as a fire fighter) who are diagnosed with cancer presumed to arise from and during the course of their employment.  Act 107 requires private health care plans to pay for or provide medical care, services and supplies for those diagnosed with cancer for controverted workers’ compensation claims that are accepted or determined to be compensable.  The claims covered under Act 107 include leukemia, multiple myeloma, non-Hodgkin lymphoma, or cancer of the lung, brain, stomach, esophagus, intestines, rectum, kidney, bladder, prostate or testes.

In 2019, the Thirtieth Legislature, the SFC was successful in supporting passage of Senate Bill 148, which clarifies the authorization of the use of fireworks by permit for movie, television, and theatrical productions and for activities for testing, disposal, and destruction of illegal fireworks by law enforcement.

One outcome of the 2019 Legislative session was the establishment of a task force to study the issue of residential fire sprinkler costs on new one- and two-family dwellings (Senate Concurrent Resolution [SCR] 3, SD 1).  The task force was composed of representatives from the SFC; both houses of the Legislature, each counties’ building departments and water purveyors; insurance commission; plumbing and building contractors associations; American Institute of Architects Honolulu; and the Hawaii Chapter of the Society of Fire Protection Engineers.  The task force met several times and produced deliverables but was unable to obtain accurate residential fire sprinkler cost estimates from outer island plumbing contractors.  Thus, the task force report remains incomplete.

In 2020, the Thirtieth Legislature, the SFC was successful in facilitating passage of Senate Bill 2130, SD 1, HD 1 which enabled the State Fire Code to bypass the Hawaii Administrative Rules process for adoption.  Passage of the bill allowed a significantly simplified approach for State Fire Code adoption while still maintaining opportunities for public input.

In 2021, the Thirty-First Legislature, the SFC was successful in supporting passage of SB 1340, SD 2, HD 2, CD 1, which created an additional licensure category for emergency medical technicians (EMT) 1 who are certified at a higher practice level than EMTs but do not provide ambulance services.  Act 119 specifies State EMT licensure of fire fighters and lifeguards for the City and County of Honolulu who are certified as EMTs, will align to the appropriate level of certification to achieve consistency with national standards.

During each Legislative session, but with little success, the SFC attempts to convince legislators to repeal Act 83, SLH 2012, which prohibits counties from requiring the installation of residential fire sprinklers.

The SFC will also continue to educate and be an advocate for fire, life safety, and property protection in the community to reduce the devastating consequences of fire, hazardous materials, and other dangerous conditions.

The following focus areas are identified and addressed in synchrony with the SFC’s Strategic Plan: